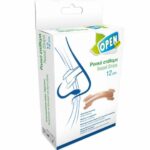 Self-adhesive nasal patches relieve the symptoms of nasal congestion. Thus favoring the proper passage of air in the airway, during the night rest. These nasal strips open immediately and gently the nasal passages for easier breathing. These nasal strips are intended for people who suffer from snoring, heavy breathing, nasal congestion sleep apnea and are very useful during sports activities to facilitate air flow through the nose.

Snoring is the production of respiratory noise during sleep, and comes from the vibrations of the pharyngeal walls. Describing snoring as a “breathing disorder” is fundamentally wrong, because most healthy people snore some nights, at some point in their sleep, especially when they are very tired. About 30% of the general population snores every time they sleep. 80% snore only occasionally.

Age: In middle age, there is a slight narrowing of our neck, accompanied by a decrease in the tone of this muscle.

Construction: Men have a more limited air passage than women and thus are more likely to snore. Έ

Problems of the nose and sinuses: Blocked airways (eg mucus) make it difficult to breathe, creating a vacuum in the throat, which can lead to snoring.

Alcohol, smoking and drugs. Alcohol intake, smoking and certain medications can increase muscle relaxation that will lead to snoring.

The sleeping posture. Sleeping supine (back) relaxes the muscle tone of your neck, blocking the airway and causing snoring.