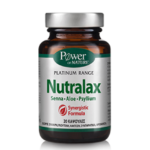 Platinum formula… synergistic formula as it contains a combination of senna, aloe and psyllid seeds & other traditional plants.

Senna: A classic plant that is traditionally used due to its content of anthraquinones, sensoids A and B.

Aloe: It is rich in anthraquinones, while its juice is traditionally used.

Psyllium Seeds: Derived from the plant Plantago ovata, which is rich in soluble fiber. When the latter reach the intestine, they absorb water, swell and thus increase the volume of stool.

Ginger: The root of the plant is characterized by a set of beneficial properties due to the phenolic substances, ginger, that it contains.

Dandelion: Traditional herb which takes its name from the bitter taste of its leaves. It has traditional beneficial applications, while it is a plant rich in vitamin C.

Hops: Traditional herb also known as Humulus lupulus. Traditionally, the flowers of the plant are particularly useful in the functions of the human body.

Calcium: Contributes to the normal functioning of digestive enzymes. *

* The above are official health claims from the European Food Safety Authority (EFSA).