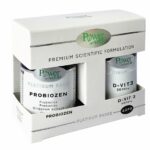 Probiozen is a unique combination that gives a high concentration of specific probiotics (a mixture of lactic acid bacteria), along with prebiotics (inulin and oligofructose) and oregano extract. One capsule a day is enough, which yields 3 billion live and active probiotics!

Platinum formula… synergistic action with a combination of probiotics & prebiotics!

Prebiotics: Special ingredients such as inulin and oligofructose, are the “food” of probiotics.

Oregano: A symbol of happiness in ancient Greece, the traditional herb of Mediterranean cuisine is rich in phytonutrients such as thymol, carvacol and rosmarinic acid. The ingredients of oregano have been extensively studied for a variety of beneficial effects.

Probiozen Dietary Supplement is suitable for:

Those who want to enrich their diet with probiotics and prebiotics

We are a Mediterranean country bathed in the sun most months of the year. And yet clinical research shows that we are deficient in vitamin D or otherwise the vitamin of the sun. To see… light our body needs vitamin D3!

History has shown that vitamin D is a very important fat-soluble substance, which was discovered in the search for the cause of rickets and osteomalacia in children. It is the only vitamin produced in our body, and even more specifically, it is produced in our skin under the influence of sunlight and ultraviolet radiation in its most active form, cholecalciferol or D3. Countless scientific studies in recent years have revealed to us about D3 many important health properties.

Contributes to the normal functioning of the immune system *

Contributes to the normal absorption / utilization of calcium and phosphorus *

Plays a role in the process of cell division *

Reducing the risk of falls is positively associated with orthostatic instability and muscle weakness. Fall is a risk factor for fractures between men and women aged 60 and over *

* The above are official health claims from the European Food Safety Authority (EFSA).

The Platinum Range D-vit3 2,000iu dietary supplement contains vitamin D in its most bioavailable form, as cholecalciferol (D3). They are in the form of swallowed tablets, which are enteric-soluble, that is, they pass unchanged from the stomach and dissolve in the small intestine, where the absorption of vitamin D3 takes place.

People with low levels or deficiency of vitamin D3

People who are not often exposed to the sun