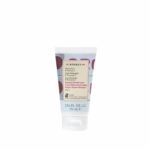 Antioxidant vitamins C and E act against blemishes, while sunscreens prevent the formation of new discolorations. Almond oil and provitamin B5 keep hands soft and hydrated.

Vitamins C and E / with antioxidant action against blemishes, enhancing the radiance of the skin.

The organic Almond Oil in the KORRES compositions is prepared by cold pressing of organic almonds [fruits of the Prunus amygdalus dulcis tree] in which the brown, thin skin has been preserved on the outside. This process leads to the production of a higher quality oil at the level of concentration of active ingredients [compared to the corresponding oil from fruits in which the brown skin has been removed], as according to literature data, confirmed by laboratory studies, its oxidative stability Almond oil is attributed to the high content of α-tocopherol. The oil resulting from the final treatment has quality characteristics according to international standards, for example based on oleic acid and α-tocopherol content. The organic Almond Oil of KORRES has been measured in terms of its oxidative stability by the Rancimat method [method by which the antioxidant potential of an oil is controlled], proving the high antioxidant protection it offers.