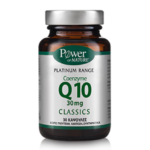 Coenzyme Q10 (Co Q10), also known as ubiquinone, is found and produced in all of our cells. It acts as a coenzyme for the transport of oxygen in the cycle of energy production. Over time, the production levels of coenzyme Q10 in our body decrease. This valuable ingredient is found in the diet mainly in foods of animal origin.

The Coenzyme Q10 of the Classics Platinum Range series is of high quality and bioavailability, free of heavy metals, protected by the valuable vitamin E and found in a non-genetically modified soy environment.

Those who do not eat red meat often

Those who show low levels of Q10 in the body