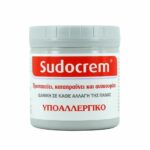 Sudocrem Soothing Cream for Changing the Diaper with Anti-irritants, 250 gr

Available from 4 to 10 days

Sudocrem has a water-repellent base that forms a protective barrier, thus helping to stop the contact of any irritants (urine and feces) with the skin. In addition, the emollient effect of Sudocrem can soothe irritated skin that has become inflamed, while leaving a soft feeling on the skin.

Sudocrem is the leading product on the UK market for the treatment of infant diaper dermatitis. Clinically proven, it helps soothe, heal and protect your baby’s sensitive skin from further irritation.

Sudocrem can also be used for other skin conditions that need a soothing, protective antiseptic cream with additional healing, antibacterial and antifungal properties.

Benzyl alcohol is a weak local anesthetic that acts to relieve local pain and irritation. It also acts as a disinfectant / antibacterial agent and is responsible for protection against bacterial infectious agents.

Infant diaper dermatitis causes discomfort and crying in babies and occurs in one in four babies at any given time. Although, like adults, babies have a natural protective layer on their skin, the ability to provide protection can be affected if the skin remains moist for a long time, making it vulnerable to irritation and sensitivity. As your baby’s buttocks are locked in a diaper most of the time, you should not

be impressed by the fact that many babies

suffer from infantile dermatitis from above.

What is baby diaper dermatitis?

Baby diaper dermatitis is a common cause that upsets babies and makes them cry, which is caused by inflammation of the skin that is irritated by moisture and contact with urine and feces.

It starts with a slight reddening of the skin in the diaper area, resulting in irritation and discomfort.

What causes diaper rash in infants?

Infant diaper dermatitis is caused by the contact of urine with the baby’s skin for prolonged periods of time. Urine can react with the stool in the diaper, affecting the skin, and in severe cases can cause skin rupture or even blisters.

It is also possible for the skin to become infected afterwards. The friction caused by rubbing the diaper on the baby’s sensitive skin and the detergents that have not been completely rinsed off the cloth diapers can also contribute to the development of baby diaper dermatitis.

When is baby diaper dermatitis more likely to occur?

Baby diaper dermatitis can occur at any time and sometimes for no apparent reason, as some babies have more sensitive skin and may be more prone to this condition.

However, there are certain periods during which babies are particularly susceptible to infant diaper dermatitis, such as:

During teething When switching from breastfeeding to bottle-feeding After using antibiotics, which can disrupt the baby’s digestive system causing diarrhea When starting solid foods Cow milk consumption for the first time cause the problem to start.

Infant diaper dermatitis usually begins with a slight redness in the diaper area.

It usually does not affect the skin folds. Areas such as the buttocks and upper thighs may be red and sweaty.

The skin may also be irritated, with spots and warm to the touch. Dry and scaly skin spots may also develop.

In more severe cases, blisters and pus-filled spots may appear. The best option is to prevent the appearance of baby diaper dermatitis from the beginning, but if it occurs, you can soothe and heal the area, as well as prevent its recurrence by using a baby dermatitis cream at every diaper change.

How the cream works

Sudocrem can relieve the pain and irritation of baby diaper dermatitis, while other ingredients can help heal the skin.

First, Sudocrem is formulated with a water-repellent base that forms a protective barrier, helping to stop any irritants (urine and feces) from coming into contact with the skin.

In addition, the emollient effect can soothe irritated skin that has become inflamed, while leaving a soft feeling on the skin.

The general rule is to use a small amount and apply it in a thin layer. Massage in small circular motions until the Sudocrem disappears, leaving a clear film. If the affected area is not covered, apply a little more cream. However, if the area remains white after application, then too much has been applied.

Sudocrem can be applied to any diaper change. Remember, however, to apply only a thin layer of cream, as a small amount of Sudocrem can spread too much.